These shorebirds are black and white in color with long orange and black bills. They have black markings on the top half of their bodies and white below with orangish-red feet. Their Bills are long with the lower mandible considerably longer than the top one. They use their bottom mandible to help them in skimming the water to catch fish such as speaking, bunker, or killifish. Once the bottom bill touches the fish the top one closes down holding it in the palace for the trip back to land. Skimmers arrive in new york during late April, early may, and beginning in June to early July they start to lay their eggs. Like most shorebirds, they lay their eggs in shallow scrapes in the sand. They will lay 3-4 eggs that have incubation periods of 21-26days. Once the chicks hatch the parents will forage for food and bring fish back for the chicks. The main fish they bring back are needlefish, silversides, killifish, and bunker.

Conservation- Black skimmers are; listed as a special concern in new york. The main reason for this title is due to the number of black skimmer colonies which hovers around 10 with the largest occurring at Nickerson beach 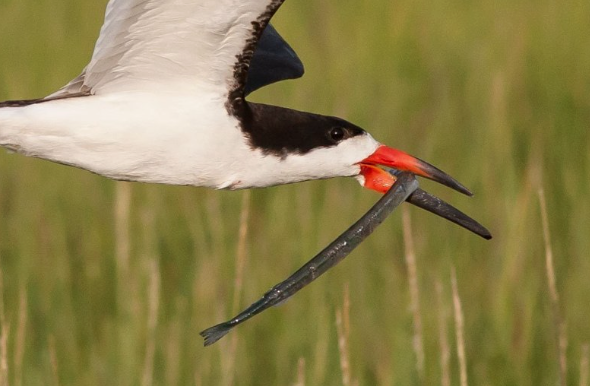